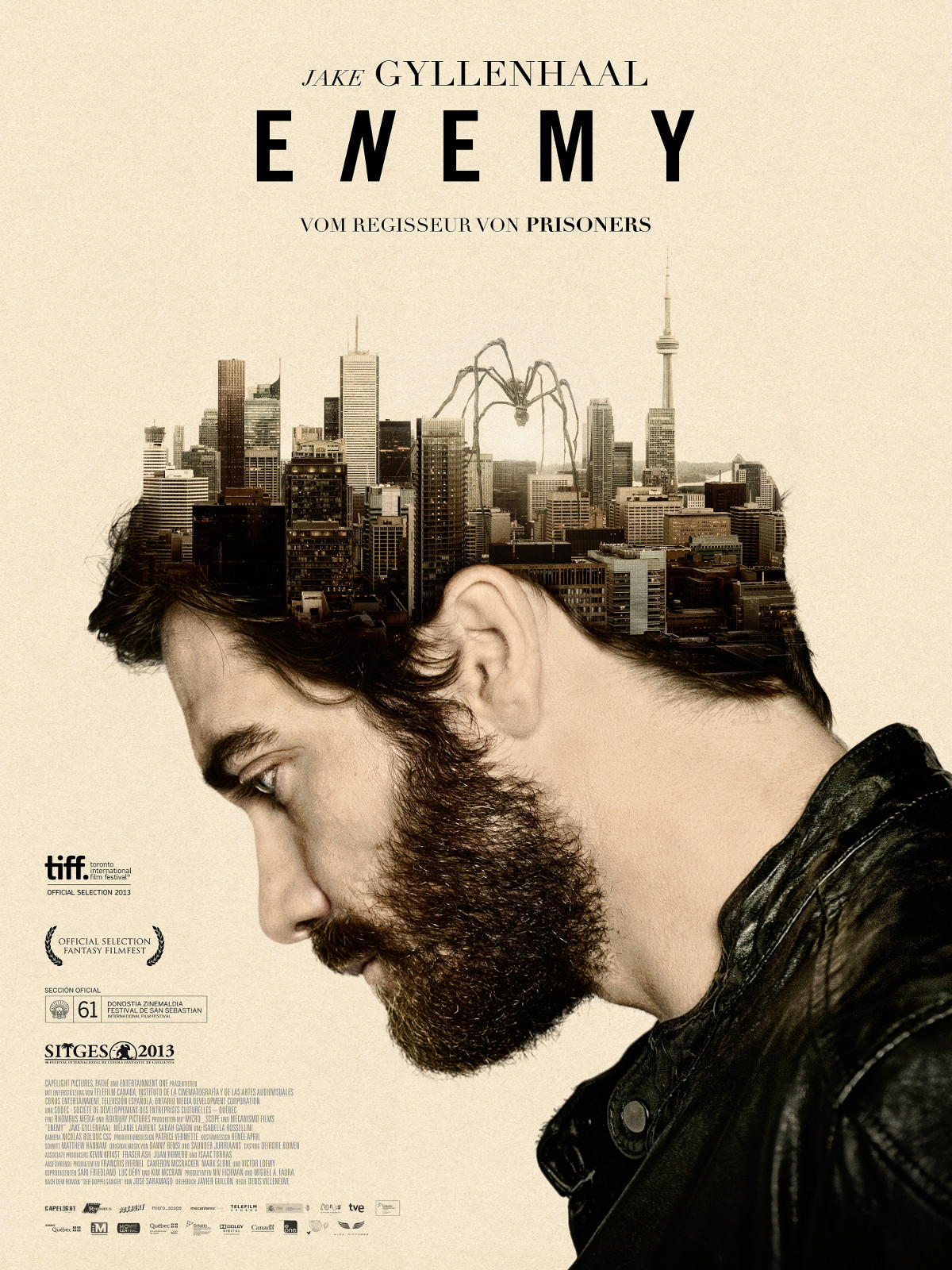 Spider and city in the head of the protagonist

Although Denis Villeneuves Enemy is strictly composed and each scene and sentence is semantically loaded on a deeper level, a rational, coherent interpretation of the film is hardly possible. For this he plays too much with the non-fulfillment of the spectator’s need for a complete solution. But most of the parts of this puzzle can be explained and combined into a meaningful picture.  Chris Stuckman has already worked the cornerstones of a plausible reading in his analysis. Enemy is about a man who is unfaithful to his wife, but returns to her with remorse. He has ambitions to become an actor but is not talented enough. There are always references to dictatorships which – as he says in the lecture hall – suppress the individual way of life. However, Stuckman remains in his interpretation behind his potential knowledge and does not come to the decisive notion: the film is based on the paradigm of classical psychoanalysis, so let’s try an explanation of Enemy based on this insight.

Denis Villeneuve gives a clear indication when he describes the film as a documentary about his or Jack’s Gyllenhaals subconsciousness. It is not so much about the life of a particular figure as about general structures in the subconscious mind of a man. But the film also gives an unmistakable hint: Gyllenhaal opens the letter, which as a major mystery motifs through the entire film, and finds a key in it. This is above all a key to the viewer, as the key word is UNIKA, which can not be understood differently as the fact that the protagonist is unique. If there is no double, we have to deal with an inner-psychic phenomenon.

In Enemy two parts of the personal I are fighting for their supremacy. On the one hand there is the lecturer, who pursues a highly qualified, socially respected work and is still visibly bruised. The pinched-out expression of the face and the bowed body reveal it immediately. It is the ego part that gives way to the dictatorship of the Freudian superego, the cultural law (the lacanian Great Other). On the other hand we’ve got the unsuccessful actor, a man who acts without conscience. He cultivates an uncommonly casual relationship with his wife and takes no consideration for other people. This is the ego part, which traces the impulses of the Es, a narcissistic world reception (in the lacanian imaginary). Both are parts of the same person. This puts the question, which scenes are analeptic, imagined or real, very much in the background. Villeneuve is not about delivering a stringent plot that can be resolved like a puzzle. He illustrates the structures of a protagonist psyche, which can be considered prototypical for many men.

Now Stuckman has already worked out that the spiders are in close contact with the women. This is more than obvious, but in the final scene a spider replaces the pregnant woman. The spiders stand for the uncertainty of the protagonist in his relationship with women. On the one hand, he goes into the net by letting himself be led astray, but on the other he is very afraid to be caught in the web of marriage. Many female spiders eat the male after sex. This attachment is obviously due to the relationship with the mother. This is not a Freudian phantasm, but is directly demonstrated in the film. The first voice in the first scene is that of the mother. However, it has an alienated aspect, since it can be heard on the part of the answering machine (distance) and, as a result of the telephone voice recording which lost fundamental bass frequencies in the voice (alienation). It is linked to the drab, cold, monotonous skyline of a gray city full of slab construction. The fact that the city is a reflection of Adam’s / Anthony’s psyche does not need any further explanation, as the film shows. In the second scene the upcoming mother Helen is presented. Between these two points the whole problematic of the protagonist circulates: the alienated relationship with his mother and the task of being a good partner to a mother. Interestingly, the first scene in the foreground of the desolate city shows many green trees. They correspond to the fact that the protagonist is willing to be a faithful husband, he is not completely alienated, there is a breeding ground for thriving life.

How the relationship with the mother is structured becomes clear during his conversation with her. She is hardly empathetic, impatient, strict and gives him orders: “Eat that!” At the same time, she obviously wants her best and is closely connected to him, because the order follows the good-natured question: “Would you like coffee?” We see Adam / Anthony with a strongly irritated facial expression. It is highly interesting in this context that the father plays no role in the film. The mother embodies both sides of the Oedipus complex: the loving mother and the kastrating threatening father. Freud considered the oedipus complex as a normal condition of a newborn. In order to understand this principle according to today’s standards, it is important not to take the Oedipal scenery literally. It is not about concrete sex with the mother and fear of physical castration before the competing father. It is rather the opening principle of love (maternal) and the restrictive principle of the law (paternal). Because of this ambivalent relationship to his mother, the protagonist can not separate these two principles. The love principle of the bond is connected with the fear of oppression. His mother promotes the Anthony side by giving him what he likes, and she promotes the Adam side by continuously adjusting him. Love and law are united for the protagonist in the female mother imago. That is why he experiences constant closeness to women as a dictatorship. Immediately after the meeting with the mother follows the sequence in which a huge creepy spider moves through the or because of its size better said above the city. Stuckman has already shown that it corresponds to the design of a so-called mother-spider statue at the shooting location. When we translate the image of the spider as a mother and the city as a psyche, the mother is the frightening and at the same time dominant element in the wilderness of the soulscape of the protagonist. All the other spiders appearing in the film are representative of this superior mother’s spider. Also the car crash ends with a look at a spider web. Anyone who remembers the conflicting argument in the car before it will probably have already established the connection. It is a metaphorical castration talk, staging the allegorical problems of the protagonist: “I am not a man? I’m not a fucking man? “He feels unseen against the woman, but his attempt at solving is awkward and ends in the accident. This elementary scene shows, not only (in connection with Helen’s simultaneous kissing) the refusal to the Anthony personality parts, but also the general relationship structure of the protagonist: his castration anxiety triggers the rejection of the partner. From this point of view it is a huge hint that the lover advises him a therapy.

Enemy is therefore not at all a stringent plot, it is about the illustrative sketching of subconscious relationships. That is why it is not surprising that Athony admonishes Adam to have slept with his wife. Of course he has, it is a self-talk. At this point, Adam’s powerful decision to suppress the Anthony shares in favor of his marriage is the exposition to the car accident: “And then I will disappear from your life forever,” says Anthony. The plot is a symbolic-analogical, representative-visual-auditive translation of what happens in the unconscious mind of the protagonist. The sparse endowment of Adam’s apartment in comparison to the noble marriage apartment is a metaphorical expression of the fact that other women are not equivalent to his wife. The ending spider corresponds to the fact that a person can not escape his unconscious programming. The historian lectures on Hegel’s theorem of the repetition of world-historical events, which thereby become a farce, and thus recurs on his own repetition compulsion in the sense of Freud. Already shortly before, the highly pregnant Helen is seen in the shower before a pattern of the shower wall that resembles spider silk. The struggle for his fears of a dictatorship of togetherness remains, even if the protagonist has decided to remain with his wife. That is why his gaze is resigned in the last scene. The spider, on the other hand, makes a fearful gesture, because it corresponds precisely to his anxiety.

We can assume that Adam equals the primary personality structure of the protagonist. This is not only the original biblical name, but various circumstances. Anthony, for example, has only played three small roles, while the position of a university teacher precedes a long scientific career. However, Anthony also has qualities that were already given in childhood and which the filmic Adam does not share, for example the enjoyment of blueberries, as the mother knows. Accordingly, it would be wrong to assume that Anthony had emerged from a dissociative personality split. He is indeed a part of a single personality, just as Adam is a different part. The human ego is ambiguously claimed by both the measures of society and the freudian super-ego as well as the desire for narcissistic dispositions and the affective needs of the freudian Es. The human unconscious is neither rational nor coherent in its intentions.